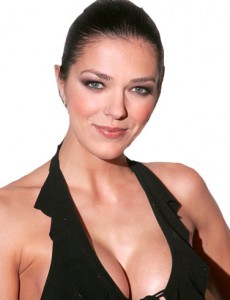 Adrianne Marie Curry was born and raised in Joliet, a small town in Illinois near Chicago. Adrianne wanted to be a model since the tender age of 12. Her big break came years later when she randomly answered a casting call for “America’s Next Top Model” a new reality competition TV show, hosted and produced by supermodel Tyra Banks.

Following her gut, Adrianne went on to win the contest and be crowned first ever America’s Next Top Model! She walked away from the show an instant celebrity and immediately landed modeling gigs for the likes of Macy’s, Revlon, Merit Diamonds and has appeared in numerous high-fashion magazines and TV commercials all over the world.

Then, in late 2004, Adrianne got a chance to come back to the small screen, as she signed on to co-star in the hit VH1 reality series “Surreal Life”, alongside cast-mates Christopher Knight, Marcus Schenkenberg, Joanie “Chyna Doll” Laurer, Verne Troyer, Jane Wiedlin and Da Brat. The show took the audiences by storm, breaking Network ratings as it won the hearts of the American audience. Little did Adrianne know that appearing on this show would change her life forever when she met and fell in love with “Surreal” co-star Christopher Knight, who is 25 years her senior and is best known for his portrayal of “Peter Brady” in the timeless TV Classic Hit, “The Brady Bunch”. Their unlikely romance immediately grabbed national headlines, resulting in the creation of a spin-off VH1 show, “My Fair Brady” that documented this high-profile romance with her new beau, as Adrianne moved to California.

“My Fair Brady” premiered in September of 2005 and became an instant hit, drawing-in fans by the millions. The show stayed in the #1 spot throughout the first season that culminated in a tear-jerking marriage proposal from Knight in the Season Finale. Thus, the Second Season of “My Fair Brady” was quickly picked up and rushed into production. The second installation of the show began where the first season left off, following the often crazed lives of the now engaged Adrianne and Chris as they make plans for a big Wedding with the cameras in tow on their way to the Alter. The highly acclaimed second season premiered in May of 2006 and ended with the Wedding Special Finale watched by millions. The success of the initial two seasons immediately prompted Season 3 that premiered in January of 2008.

In the meantime, Adrianne’s TV fame has rapidly driven her career and International exposure upward. In February 2006, she appeared on the cover of Playboy Magazine, She graced the cover of the popular magazine once again in the February issue of 2007, firmly setting Adrianne’s name in American pop culture history and landing her the coveted title of one of Playboy’s Sexiest 25 Women. Other gigs also poured in as Adrianne scored guest star roles on such hit Television shows as FX’s “Dirt”, ABC’s “Hot Properties” and UPN’s “Half and Half” among others. On the big screen, Adrianne co-starred in films such as “Light Years Away” and “Fallen Angels”.

In recent years, Adrianne decided to expand her skills, working behind the scenes as a producer and in-front of the camera as a Host. Most recently, Adrianne also appeared as a celebrity judge on two of the most recent seasons of Sony PlayStation Network’s, “The Tester”; was featured on Playboy TV’s hit show “Celebrity Sex Tales”, and became a celebrity spokesperson for the popular fitness product, “The Flex Belt”, a new perfume line “EROX”, and is currently a spokesperson for NAMCO/BANDAI Games and their mega-hit game, “Tekken Tag Tournament 2”. Adrianne has also recently hosted numerous TV Shows and Specials including DirecTV’s BlizzCon Pay-Per-View event, and entertainment new shows like Hollyscoop.

Although her marriage to Christopher Knight came to an end in 2011, Adrianne remains close with her former partner. Adrianne can be currently seen as the co-creator, executive producer and star of her new TV Series titled “Adrianne Curry’s Super Fans”, produced for Stan Lee’s new “World Of Heroes” YouTube Channel which our very own Graig Weich of Beyond Comics appeared on. She stars as TRICITY in Beyond Comics’ upcoming comic book RAVEDACTYL and is currently shown in a preview of their other comic book GEKIDO as seen on E! Entertainment Television’s Ice Loves Coco starring Icve-T, Coco & Graig Weich. She is also in development of two new television Series, slated for production later this year.