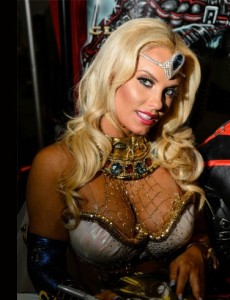 With over 15 MILLION combined followers/subscribers on social media and starring in her own TV show, Coco Austin is a force of female empowerment. From running her own business, being a swimsuit and fitness model; gracing over 50 magazine covers in a two year time frame, successfully launching her own calendars, writing a best-selling novel, starting her own clothing line Coco”Licious” and starring in the E! Entertainment Television hit reality show “Ice Love Coco” and head liner at Planet Hollywood’s “Peep Show,” in Las Vegas, Coco is a woman who’s always on the go and ready for action. She stars as CLEO (Goddess of seduction) in the BeyondComics.TV comic book GEKIDO (created by Graig Weich and Brandon Wilson) as seen on E! Entertainment Television’s Ice Loves Coco starring Ice-T, their Fox/CBS Talk show Ice & Coco and their upcoming new TV show to be announced.